This is my very fist post on this blog, so I thought I’d give a little intro on what my job is about.

On 8 March 2016, International Women’s Day, I had the amazing opportunity to speak at a conference about diversity in games in Dublin, organised by Coding Grace, sponsored by Digit Games. [https://www.codinggrace.com/events/iwd-diversity-games/63/].

The event was very successful and the speakers were captivating, all women in the games industry, from various departments:

We all had approximately 10 minutes on stage, so it had to be short and sweet. I decided to introduce the audience to game audio and the kind of workflow it involves.

I thought it would be a good idea to give a little summary of my talk here, giving an actual introduction on game audio. 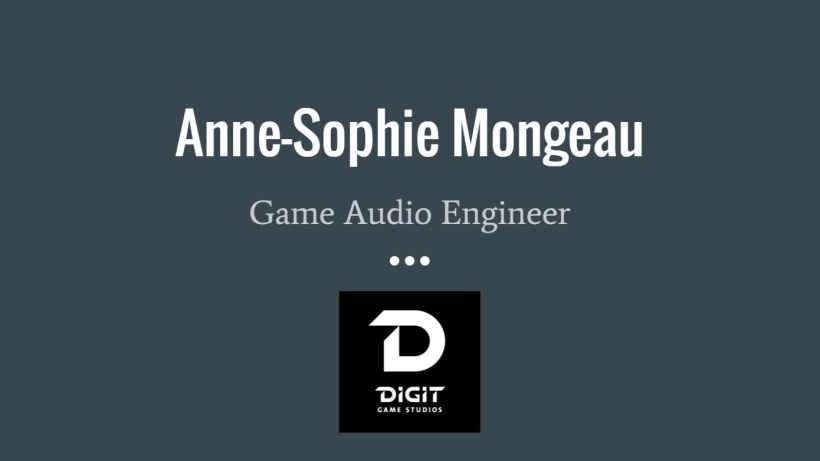 I started by playing some sound, I suggest you do the same and listen to this short 1 minute excerpt before reading further.

What you’ve just heard is a soundscape, an ambiance in an imaginary game, that transformed over time according to a game parameter. In this case, this parameter could have been for instance proximity to an enemy, or danger, as the player progresses into the game.

In any case, what happened there, was sound providing information to the player about the game and what was happening.

And that’s basically the role of the game sound designer. It’s to find ways to communicate information about the game to the player, in a way that is not only accompanying the visuals, but enriching them and adding to the gaming experience itself.

When this is done well, hopefully, this results in the player not wanting to play the game without sound.

There are tons of examples of games with fantastic audio out there.

I’m thinking for instance of

and the old classics…

The Legend of Zelda: Ocarina of Time 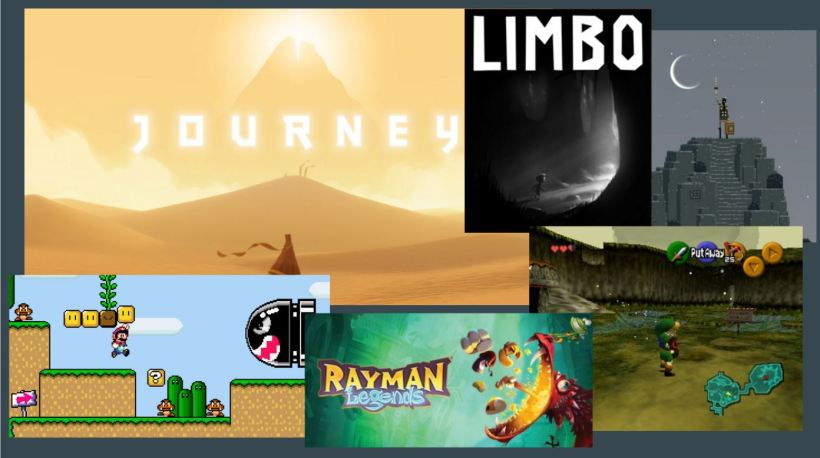 All of these games, and many more, I’d personally rather not play at all than play without sound.

I am sure that, if you have ever played Journey, you would agree that playing this game without the soundtrack would not be as good an experience.

My point here is that those games with great audio are acclaimed for it. Even winning awards! So, to the developers out there who think audio is secondary or not as important as graphics (yes, they exist), you’d better reconsider, sound might just be what will make your game stand out! There, I said it.

I’d even go further than that.

To me, playing a game without sound, or with such bad sound that it is ”better” muted (thanks to low budgets and bad decisions), is just as disappointing as playing a broken game or a game with missing assets.

I remember playing Fallout 4, and suddenly there was a missing asset, a whole house disappeared, but only the exterior frame, you could still see the furniture inside. There were no walls, no structure. I thought ‘this is a pretty accurate analogy of what bad game audio feels like – broken‘.

I knew something was meant to be there, it didn’t make sense without it, and yet I could still play the game without it. Same with missing textures, or missing VFX.  But no developer would compromise on  VFX, yet somehow audio doesn’t get the same treatment.

Working in game audio (especially mobile games), you’ll most certainly find yourself in a position where you’ll have to fight the statistics. Some will remind you that a certain amount of players play without sound, hence it makes sense to make audio a second priority. To that, I only want to say this : relying on these statistics means perpetuating them.

So, some gamers play without sound? The way I see it, it’s either because your environment doesn’t allow you to play with sound, for instance you are playing on mobile while commuting or something, OR the sound is so bad you’d rather mute it.

Buuuuut, what happens when you have something like this? (Paired with good audio, obviously).

This is from Dead Space. They won a BAFTA Games Award for Use of Audio, Original Score, and Best Sound Design in 2008 and 2009.

My point is, if you aim for quality, you have much better chances of achieving it than if you don’t. That sounds obvious doesn’t it? Not to everyone apparently. Spread the word.

Ok, enough with audio propaganda and let’s move on.

What makes good game audio then? 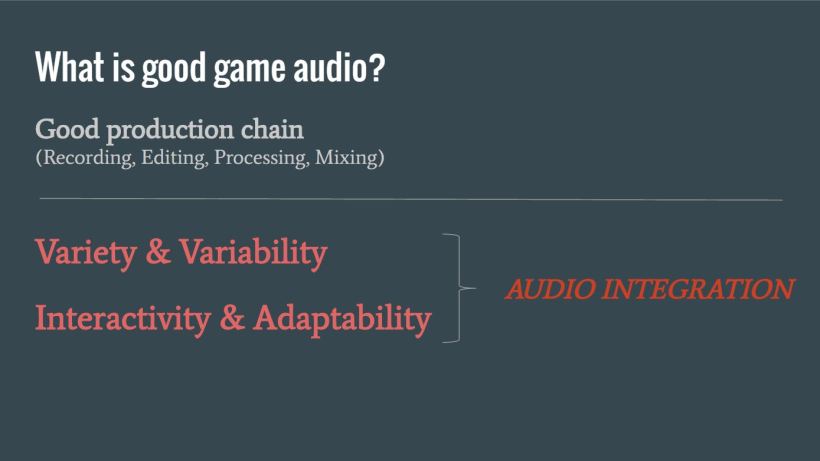 There are some obvious tricks to that, and some less obvious ones.

The obvious ones include a good production chain : this involves recording, editing, processing and mixing. But that’s true for any audiovisual production (films, etc.)

The less obvious ones concern games especially, and that is what my job is all about : audio integration.

Among the key elements of game audio integration, some of the most important ones certainly are Variety and Variability as well as Interactivity and Adaptability.

Variety is about having as little repetition as possible. This means designing multiple variations for one single sound event, or even designing so that different elements composing one sound events will be rendered in layers and combined in game in such a way that you would never really hear the same thing twice. And variability is, similarly, about finding ways to avoid sounds of similar nature being heard identically over and over again, for instance by randomizing volume, pitch, or applying other DSP effects.

Interactivity is the responsiveness to the player’s actions, and adaptability the one to the game world’s developments, outside of the player’s control. So either I, as the player, pick up something (for example), which results in some sound cue informing me of the consequence of my action, or the game itself changes, like enemies approaching, or the time is progressing from daytime to nighttime, which would result in a change in ambient sound and/or music.

Very often, the key to accomplish all of this will be to integrate the game audio into different layers. 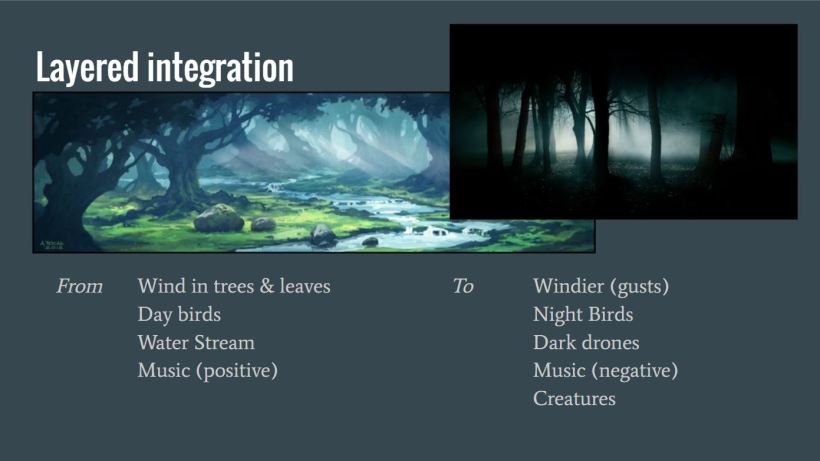 For instance, in the audio example you have listened to earlier, there were many different layers, all rendered separately so that their combination in-game would result in something different every time it is triggered, but also evolve in an unpredictable and generative way over time. This avoids the feeling of repetition you would get with one simple loop playing.

What this means, is that game audio is not only about design, but also, and maybe mostly, about the integration of the sound into the game.

In order to do that well, it takes a good amount of creativity as well as problem solving skills, but also good tools. 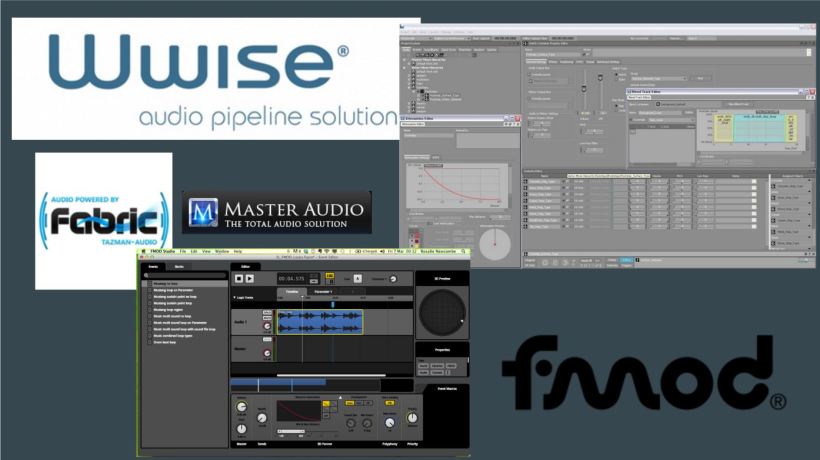 Audio middleware such as the ones shown here is crucial for game audio integration. It allows the sound designer to tie the sound events to the game events, and trigger specific and elaborate audio behaviors according to any game parameter or even. It is also vital to perform in-game mixing and profiling. And this is where it all gets really creative.

And finally, with lots of teamwork (working closely with programmers), and surely lots of fun, this hopefully results in great game audio that will enhance the gaming experience.

There, I hope this was useful to some of you. Or simply interesting. This was an introduction on game audio, a very generic overview of what I do, but you will find on this blog some more specific tips and tricks, advice, tutorials, equipment chats and plenty more.

Please don’t hesitate to get in touch if you have any questions!

Find the sound effects you need – hand-picked from the best indie sound creators in the world.